… one of the most beautiful italian villages

Water’s in a name?. The picturesque medieval hill town of Dozza is situated on a ridge above the Sellustra stream and gets its name from its connection to water. Listed as Ducia in the Chartularium Imolense as far back as 1147, this name appears to come from the medieval Latin term ducia, which in the local dialect became dòza, denoting a ditch, channel, river or water bearing structure. The origin of the name Dozza can be seen in the town’s historical coat of arms, which features a griffin drinking water as it pours down from a gutter or drain. The current version of the coat of arms includes a crown above and oak leaves around the sides. The coat of arms can be seen carved into sandstone in the provost church and at the entrance to the medieval part of the town.

The historic centre of Dozza, with its characteristic, long, thin shape, sits atop a hill overlooking the Sellustra Valley and slopes gently down towards the Via Emilia road. The original medieval buildings have remained intact and been carefully maintained. The imposing fortress at the top of the town goes hand in hand with the residential section, which begins immediately beneath it and follows the line of the old town walls to create a harmonious blend of human intervention with the nature all around. In the 10th century Dozza already had its Palazzo Pretorio, Church, tenant farmer’s houses, blacksmith’s forge and carpenter’s workshop. The town still has two parallel streets leading up from the entrance gate to the area in front of the fortress, where the La Scuderia Restaurant is located. Dozza is also home to the Emilia Romagna Regional Wine Association, which can be found inside the fortress. Founded in 1970, the organisation was given official status by the regional authorities in 1978, as the most fitting way to develop and promote the wines of Emilia Romagna in the rest of Italy and around the world. The association has its offices on the ground floor of the fortress while the beautiful setting of the cellar, which was fully renovated in 1990, houses a permanent selection of wines available for sale.

Back in 1960, Dozza was still an almost entirely forgotten town, well off the beaten track and therefore completely unknown to tourists. That same year, the town’s Rocca Sforzesca fortress, which had previously been the private residence of the Marchesi Malvezzi-Campeggi family, was acquired by the Dozza Town Council. Following restoration work it was opened to the public.

At the same time, locals began to wonder how to really put their charming town of Dozza on the map and attract visitors from far and wide. There were after all several attractions including the mighty, impressive fortress with its sumptuous interiors and art collection, as well as the characteristic layout of the old town and the local produce, especially the fine wines such as Trebbiano, Sangiovese and the renowned Albana (a traditional sonnet by an anonymous poet defines Dozza as “the fertile mother of robust, fragrant albana wines”e;.

It was a time when impromptu painting competitions were very popular around the region and at every country fair or festival you would see painters working at their easel. Dozza wanted to do something a little different and the town came up with the idea of the Muro Dipinto painted wall festival. The first edition took place in June 1960 and lasted for two days, a Saturday and Sunday when it rained continuously on the poor painters. Despite the downpour the event was a great success and attracted a great number of visitors who came with their umbrellas to watch the artists at work.

An old Italian proverb says that rain brings good luck to an event and never has it been so apt. Four more annual editions followed in 1961-1962-1963-1964, meeting with a popular and critical success that went way beyond all expectations. The Muro Dipinto festival had proved to be a powerful marketing tool for Dozza: apart from adding a cultural event to the calendar it had opened the way for tourism and therefore the socio-economic development of the town. The Dozza Pro Loco organisation decided to take the festival up a level, turning it into a BIENNIAL MODERN ART EVENT, with the precious support of well-known art critics and journalists (such as Marassi, Carluccio, DeMicheli, Valsecchi and others). Since then a host of renowned national and international artists (including Matta, Saetti, Sassu, Purificato, Brindisi, Sughi, and so on) have created huge murals on the walls of Dozza, making this a major artistic and cultural event and turning Dozza into the “capital of modern murals”.

The following biennial events 1965-1967-1969-1971 were organised (like the first five editions) as a contest with a panel of judges, points and range of prizes. From 1973 onwards however the competitive element was abandoned so the artists were rightly considered on equal terms with the same prizes and recognition awarded to one and all. From the beginning in 1962 (and still today) the artists taking part have had to donate a “sketch” of their mural to the organisers who have thus been able to create a unique exhibition of modern art in the fortress, the Muro Dipinto Gallery, which also features a huge number of photographs of the various editions. The gallery also houses some actual murals which have been removed from the external walls to stop them being damaged by the elements.

In the 18 editions of the Muro Dipinto festival which have taken place to date, more than 180 artists have left their creative mark on the walls of Dozza, turning this little town into a permanent art gallery, a renowned cultural centre and a major tourist attraction. 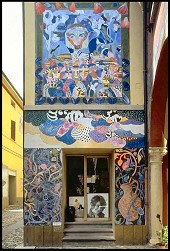 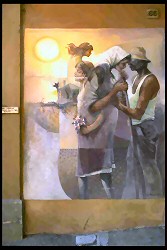 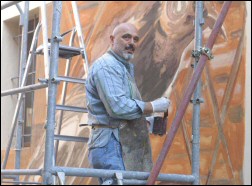